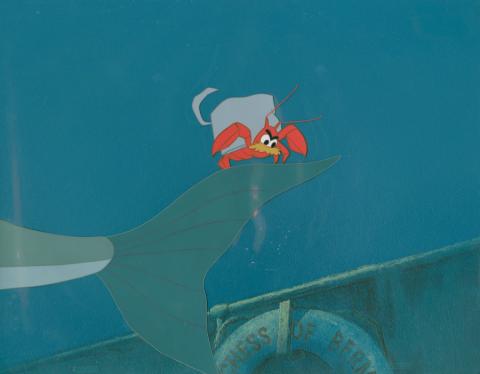 This is an original production cel and background setup from the Warner Bros. Studios production The Incredible Mr. Limpet (1964). The hand-painted cel features Crusty jumping off of Limpet's tail as Limpet and Ladyfish make plans to visit Coney Island. It was created at the studio and used during production, representing an actual frame of animation that was photographed and appears in the cartoon. The cel is paired with a hand-painted background from the film, which are extremely rare. The overall measurements of the cel and background are 10.5" x 12.5",10.5" x 17" respectively, and the image itself measures 7.5" x 8.75",10" x 16.5" on the cel and background respectively. The setup is in very good condition with no wear to cel, but there is surface paint lifting in the background. Professional restoration is available, please ask for more information. The final image shown is a screen grab from the film that is shown for reference of the scene this cel was used in, and it is not a physical print included with the artwork.