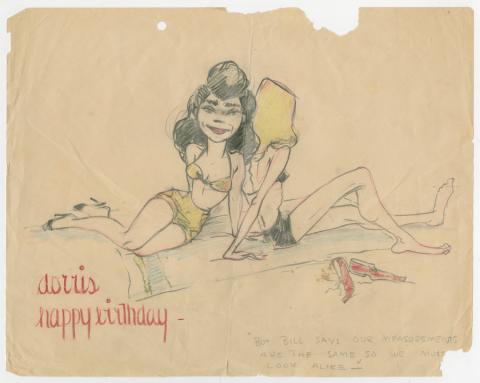 This is an original drawing created as a gift for a studio ink and paint artist created by an animator at the Warner Bros. Studios in the 1940s. This original graphite drawing features a a comically designed image depicting the ink and painter, Dorris, making a comment about her body type that was given as a gift for her birthday. This drawing was likely created by studio animator, Don Williams, as he was a friend of the ink and painter. Williams worked for WB but also went on to be a famed animator and performer with Walt Disney Studios, where he also became an original Mouseketeer on the original Mickey Mouse Club. The overall measurements of the piece are 9.5" x 12" and the image itself measures 8" x 11.5".