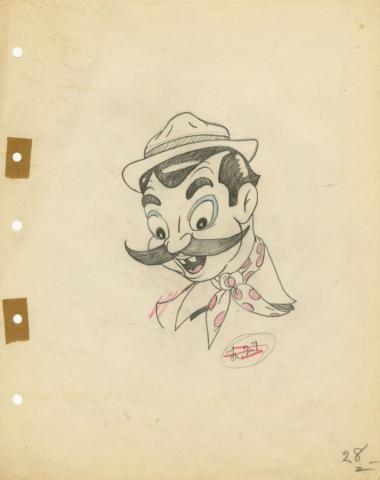 An original production drawing from the Warner Bros. Studio Merrie Melodies short Greetings Bait (1943). The drawing features a wonderful caricature of actor Jerry Colonna, right after he's revealed to be the fisherman. The drawing was created at the studio and used during the production of the short. Measuring 12"x9.5" overall, with the image area measuring 6"x4.5", the drawing is in very good condition with light creasing throughout, some staining on the upper left corner, and minimal edge wear including folded corners. Most artwork from the early years of Warner Bros. studios was lost or destroyed, making artifacts from these memorable cartoons an absolute rarity.