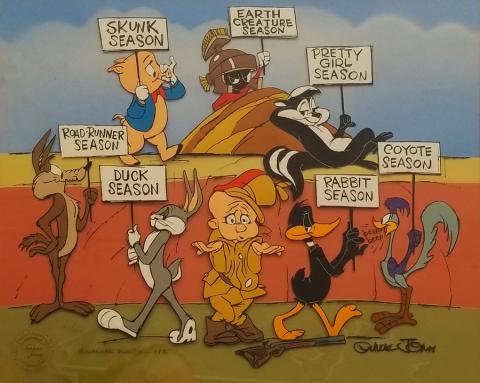 This is a very early hand-painted Chuck Jones Limited Edition cel, titled "Hunting Season." It was created from an original Chuck Jones drawing, and features eight classic Looney Tunes characters holding appropriate Hunting Season signs, in a clever parody on "Duck Season/Rabbit Season" (from the 1951 cartoon, Rabbit Fire). This 16 field cel has Bugs Bunny, Daffy Duck, Wile E Coyote, Pepe Le Pew, Marvin the Martian, Porky Pig, Road Runner, and clueless hunter Elmer Fudd. This was an instant sell-out when it was released in 1983. Chuck Jones began doing limited edition cels due to the fact that most of all the production cels were thrown away in the early 1960s. This has the hand-cut custom construction paper background with air brushing, as seen on the earliest Chuck Jones limited edition cels. This was an edition of only 200 pieces, and this is #2. The cel is boldly hand-signed by Chuck Jones (1912 - 2002). Framed to 20.5" x 23.5", with a mat opening size of 13" x 16", and the hand-painted image of the characters measuring 12" x 14.5". Characters are all nice images of 2" - 6". One of the most difficult Chuck Jones pieces to acquire. Very Good condition.