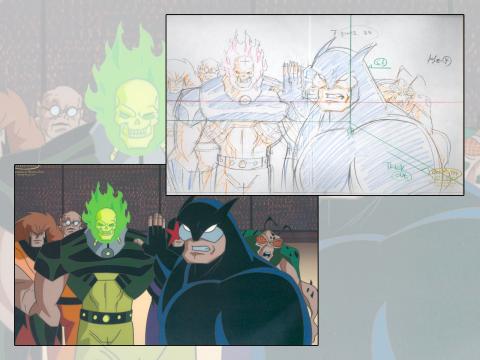 An original production drawing from the Warner Bros. Studios animated series Justice League Unlimited (2004-2006). Featuring Wildcat, Atomic Skull, and other characters, the drawing was created at the studio and used during the animation process. The series did not use animation cels, but the studio created a matching one-of-a-kind hand-painted cel paired with a color copy background to accompany the drawing (denoted by the 1/1 marking on the cel). The cel exactly matches the drawing, so no two recreated cels would be identical. The studio no longer offers this service. Measuring 11"x16.5" overall, and with an image measuring 10.75"x16.25", the drawing and cel are in very good condition.