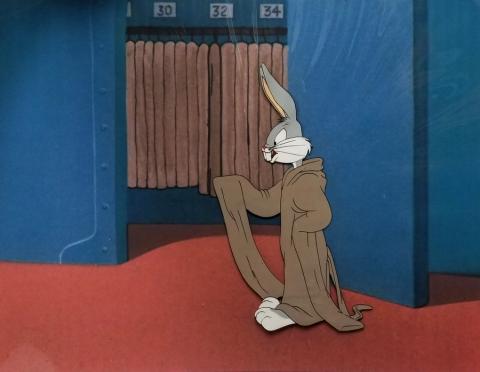 An original production cel from the Warner Bros. Studios animated short The Hasty Hare (1952). Featuring Bugs Bunny with an oversized robe that he was given from Marvin the Martian, the hand-painted cel was created at the studio and used during the animation process. The piece is an actual frame of animation that was photographed and appears in the Chuck Jones directed cartoon. Measuring 10"x12.5" overall, and with the image area measuring 6.5"x4", the production cel is in very good condition with some cel rippling and is paired with a color copy reproduction background. This era of Warner Bros brought to life some of the most memorable cartoons to ever be made, but most of the art was destroyed, making this cel an amazing piece of animation history.