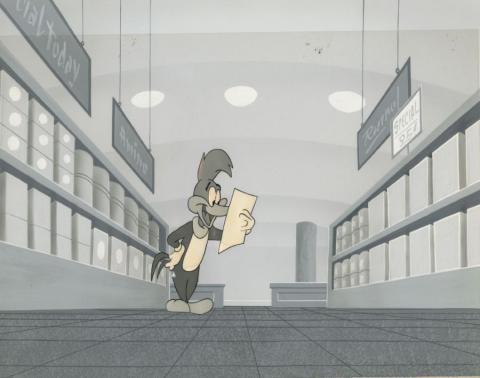 An original production cel and background setup from a 1950s television commercial for Kellogg's Rice Krispies cereal. Featuring Walter Lantz's iconic character, Woody Woodpecker, reading a list in a grocery store, and is rendered in black-and-white because color television wasn't ubiquitous yet. The cel and background are from different scenes but were both photographed and appear within the same commercial. Measuring 10.5"x13", with a character image measuring 4.5"x3", the setup is in good condition with light line wear, paint lifting throughout, and a small instance of paint loss on Woody's leg.