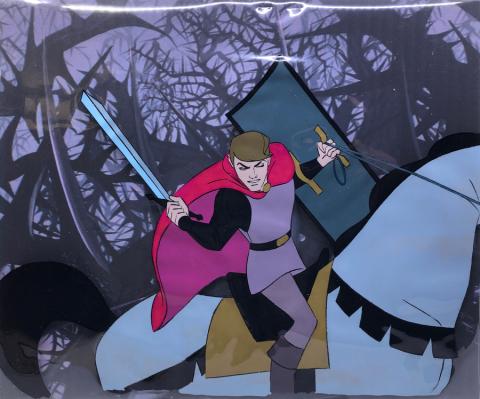 An original production cel from the Walt Disney Studios animated film Sleeping Beauty (1959). Featuring Prince Phillip riding Samson and swinging his sword through the thorny path to battle Maleficent, the hand-painted cel was created at the studio and used during the animation process. The piece is an actual frame of animation that was photographed and appears in the movie. Measuring 10"x12" overall, and with an image area measuring 8.5"x12", the cel is in fine condition and is paired with a color copy reproduction background. While Sleeping Beauty was the last Disney feature film to use hand-inking for the majority of the black linework, the studio did experiment with using xerox lines in some scenes of the film. This particular cel comes from one of those scenes as is evidenced by the wearing on the lines which is common with cels produced this way. Also included is the original mat from Disneyland Art Corner which has the genuine Art Corner gold seal on the reverse.