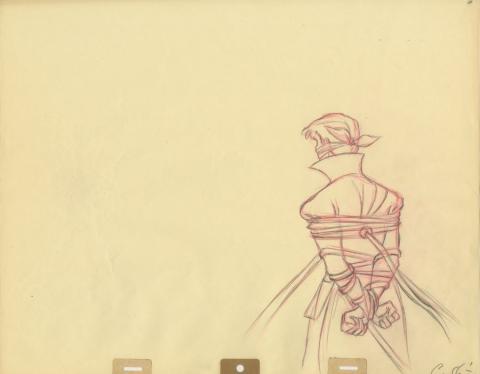 An original production drawing from the Walt Disney Studios animated film Sleeping Beauty (1959). Featuring a back view of a tied up Prince Phillip when captured by the Evil Maleficent, the graphite drawing was created at the studio and used during the animation process. The image was created by Disney Legend, and one of the Nine Old Men, Milt Kahl. The animation seen in Sleeping Beauty is a masterful example of the Nine Old Men's talent, and Kahl's draftsmanship is a prime example of Disney Studio's superior artistry. Measuring 12.5"x15.5" overall, with a character image measuring 6.25"x7.5", the drawing is in very good condition with light handling wear and discoloration.