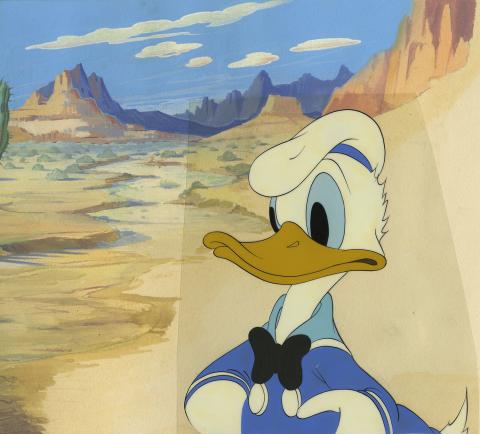 An original setup from the Walt Disney Studios featuring a hand-painted production cel of Donald Duck and a hand-painted production background. The background is a stunning dessert landscape that was created at the studio and used in the production of The Autograph Hound (1939). The film feautres this image as part of a moving pan background with overlay elements. The background has been trimmed and the overlays are not present. The background is paired with a wonderful cel of Donald Duck that is trimmed slightly close to the image and was used in a Disney cartoon likely in the 1940s. Measuring 9" x 12.25" overall with a main image area measuring 8"x9", the setup is in very good condition for an artifact of this age.