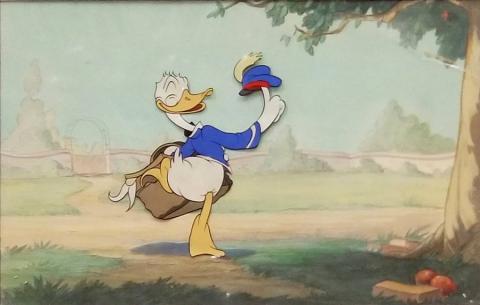 This is a gorgeous 1930's production cel and background setup from the Walt Disney Studios. The hand-painted cel features a great pose of Donald Duck walking while twirling his cap that is from the short Mickey's Circus (1936). The cel is paired with a hand-painted background that appears to be an unfinished cut scene from the short Self Control (1938). Both pieces were created at the studio and used during production, with the cel representing an actual frame of animation that was photographed and appears in Mickey's Circus, and the background featuring elements from Self Control that didn't make the final shooting of the film in this particular layout. The overall measurements of the piece are 14" x 18" framed with the mat opening measuring 7" x 11" and the image of Donald himself measures 4.75" x 4". The setup is in very good condition with expected aging, but no apparent damage or wear.