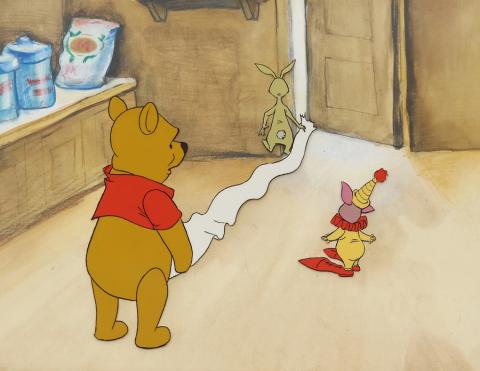 An original production cel, and background setup from a 1970s Walt Disney Studios animated educational film. Featuring Winnie the Pooh, Piglet in a clown costume, and Rabbit carrying one of his lists, the hand-painted cel was created at the studio and used during the animation process. The cel is an actual frame of animation that was photographed and appears in a cartoon and is paired with a hand-painted production background. Measuring 10.5"x16.25" overall for the background and 10.5"x12.25" overall for the cel, and with a character image area measuring 6"x6.5", the setup is in very good condition with minor edge wear.