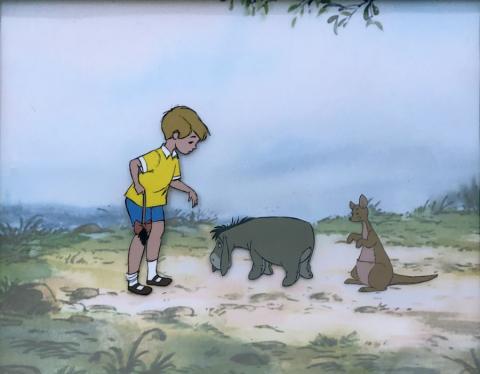 An original production cel from the Walt Disney Studios animated film Winnie the Pooh and the Blustery Day (1968). Featuring Christopher Robin talking with Eeyore and Kanga, the hand-painted cel was created at the studio and used during the animation process. The piece is an actual frame of animation that was photographed and appears in the movie. Coming from the collection of a former team member of Disney's Ink & Paint department, the cel was custom matted with a simple mat, and a second small cel was hand-painted with a custom Winnie the Pooh logo displayed in a smaller mat opening below the production cel. Measuring 12"x15.75" matted with the character image area measuring 3.75"x6", the slightly trimmed cel is in very good condition with light rippling to the cel. The setup includes the unique matting and custom logo cel from the former painter and is paired with a color printed reproduction background.