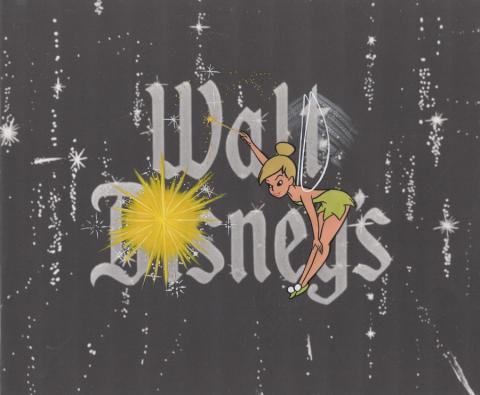 A very rare original production cel from the opening titles of the Walt Disney Studios television series Walt Disney's Disneyland (1954-1958). Featuring an iconic pose of Tinker Bell using her magic wand, the hand-painted cel was created at the studio and used during the animation process. The piece is an actual frame of animation that was photographed and appears in the opening credits. Measuring 13.5"x15.5" framed with the mat opening measuring 8"x10", and with an image measuring about 4.5"x3.5", the cel is in fine condition. The cel was originally prepared for distribution at the Disneyland Art Corner and is accompanied by the original backing mat with the official Art Corner Gold seal. We have paired the cel with a printed reproduction background.