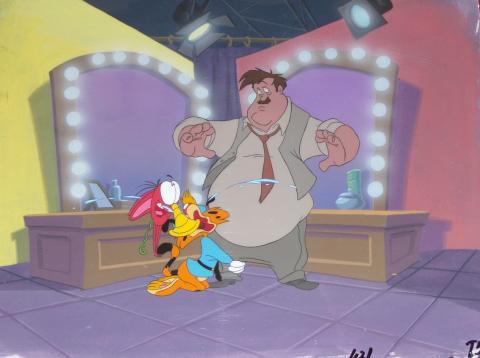 An original production cel and background setup from the Walt Disney Studios animated series Bonkers (1993-1994). Featuring Bonkers D. Bobcat, Lucky Piquel and Toots, the hand-painted cels and production background were created at the studio and used during the animation process. The imagery is created with a composition that compiles cel layers and backgrounds from various episodes. Each piece is an actual frame of animation that was photographed and appears in the series, but not together. Included are pair of production drawings. Measuring 10.5"x12.5" overall, with the character image measuring 6"x6", the cels and background are in very good condition with some stickiness between cels.