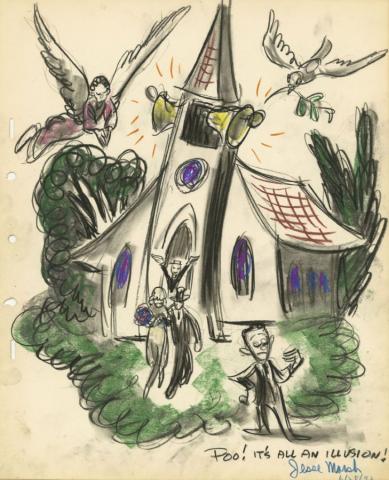 An original animator's gag gift drawing from the Walt Disney Studios. Featuring a rough drawing of a couple exiting a lively chapel with a man in the front saying "Poo! it's all an illusion", the cynical drawing was created as a gift to Milt Banta in commemoration of his wedding in 1943. Milt joined Disney Studio in the early 1940s as an assistant animator before becoming a writer. He is credited on several shorts as well as Alice In Wonderland, Peter Pan, and Sleeping Beauty, as well as several Golden Books in the early 1950s. The image was drawn by Disney animator Jesse Marsh. Measuring 15.25"x12.5" overall, with the character image measuring 13"x11", the drawing is in fine condition with minimal edge wear.