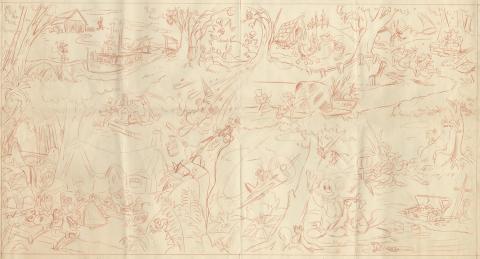 This is an original Layout Drawing,Merchandise Art from the Walt Disney Studios production of a book from the 1950s, likely a Disney Treasury. This Layout Drawing,Merchandise Art features imagery from a variety of Disney productions such as Peter Pan, Snow White,The Skeleton Dance, The Three Little Pigs, Fantasia, Pinocchio, and more and was created at the studio and used during the production of the film. The overall measurements of the piece are 24.5" x 30" and the image itself measures 16" x 30".