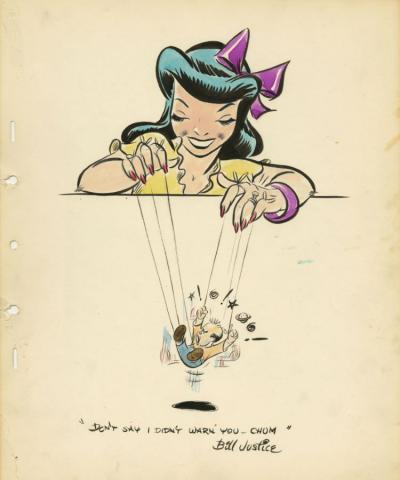 An original gag drawing created as a gift to Milt Banta in commemoration of his wedding in 1943. Milt joined Disney Studio in the early 1940s as an assistant animator before becoming a writer. He is credited on several shorts as well as Alice In Wonderland, Peter Pan, and Sleeping Beauty, as well as several Golden Books in the early 1950s. This particular drawing was created by Disney Legend Bill Justice, as it was a tradition at the studio for the artists to constantly draw and share caricatures of other artists as well as their original artwork. Measuring 15.25”x12.5” overall, with the image area measuring 13”x9”, the drawing is in very good condition with edge wear including some tearing and creasing, and tears on the peg holes.