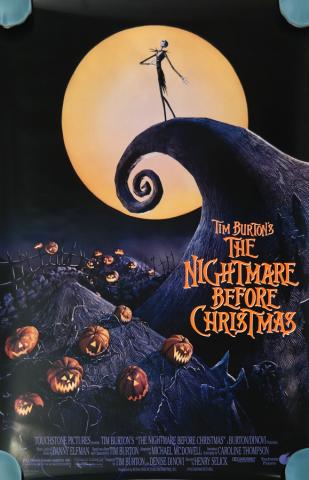 This is an original one–sheet poster from the Walt Disney Studios production The Nightmare Before Christmas (1993). The poster features an iconic image of Jack Skellington standing over the pumpkin patch of Halloween Town in the moonlight. The overall measurements of the piece are 41" x 27". This one-sheet poster is in very good condition with light handling wear. When this movie was first released, Disney was unsure of the response it would receive, so it was released under the Touchstone Pictures branding. Early Nightmare items will only say Touchstone, as this poster does, and not mention Disney Studios.