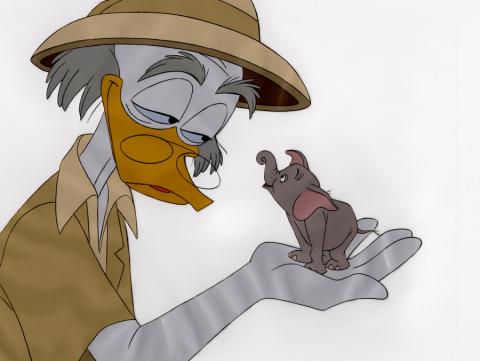 An original production cel from the Walt Disney Studios Wonderful World of Disney episode Nature's Strangest Oddballs (1970). Featuring Ludwig Von Drake holding Goliath II in his hand, the hand-painted cel was created at the studio and used during the animation process. This episode paired live-action nature footage with animated shorts, including Goliath II. The piece is an actual frame of animation that was photographed and appears in the episode. Measuring 12.5"x16" overall, and with the image area measuring 11"x13", the production cel is in good condition with two small spots of paint loss in lower left corner.