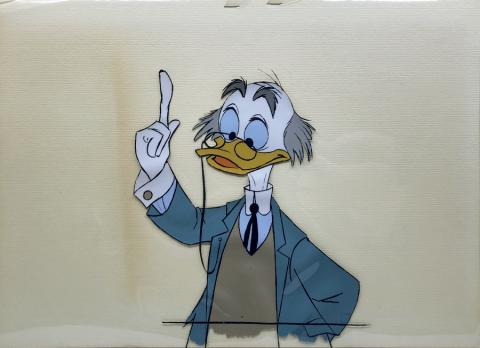 An original production cel from a 1960s Walt Disney Studios TV short featuring Ludwig Von Drake (1960s). Featuring Ludwig appearing to strike an idea with his finger in the air, the hand-painted cel was created at the studio and used during the animation process. The piece is an actual frame of animation that was photographed and appears in a cartoon. Measuring 7.5"x10" overall and with the character image measuring 5.5"x5", the trimmed cel is in fine condition with rippling in the image and the cel has been stapled to its backing board on the top edge, as it was originally prepared for sale at the Disneyland Art Corner.