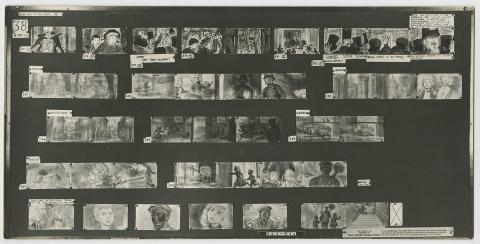 This is an original photostat storyboards from the Walt Disney Studios production of Mary Poppins (1964). This photostat storyboards features Michael Banks, Jane Banks, George Banks, Mr. Dawes, Bankers, Police, and Bert from the visit to the bank, and was created at the studio and used during the production of the film. The overall measurements of the piece are about 8" x 16" and the image itself measures 8" x 16". The piece is in very good condition overall and the photostat is mounted to a piece of mat board that is the same size as the storyboard sheet.