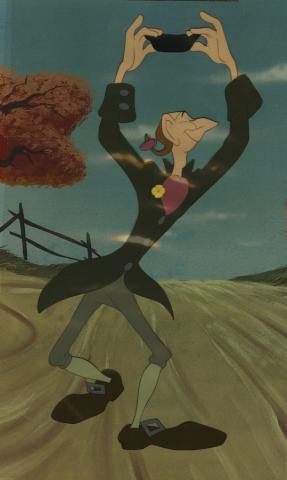 This is an original production cel from the Walt Disney Studios production of the Sleepy Hollow segment of The Adventures of Ichabod and Mr. Toad (1949). This hand-painted cel features Ichabod Crane lifting his hat and was created at the studio and used during the production of the film, representing a singular frame of animation that was filmed and appears in the film. The overall measurements of the trimmed production cel are 12.5" x 6.75" and the image itself measures 10.5" x 5.25". The cel is in fantastic condition and is paired with a color printed reproduction background.