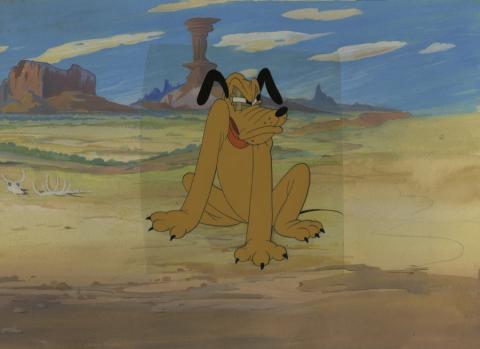 An original setup from the Walt Disney Studios featuring a hand-painted production cel of Pluto and a hand-painted production background. The background is a stunning dessert landscape that was created at the studio and used in the production of The Autograph Hound (1939). The film feautres this image as part of a moving pan background with overlay elements. The background has been trimmed and the overlays are not present. The background is paired with a wonderful cel of Pluto that is slightly trimmed close to the image and was used in a Disney cartoon likely in the 1940s. Measuring 9.25"x16.5" overall with the main image area measuring 8"x 11", the setup is in very good condition with wear to the edges of the background.