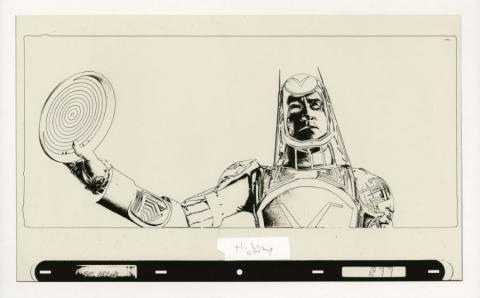 An Ektachrome continuous-tone transparency cel from the Walt Disney Studios live action film TRON (1982). Featuring David Warner as Sark, explaining the identity disc to the new programs, the Ektachrome cel was created at the studio and used during the production of the special effects sequences in the film. The groundbreaking film predated modern day computer animation and effects, requiring the unique lighting effects to be hand created frame by frame. This painstaking process was only used for TRON, making the film's effects artwork a special piece of movie history. Measuring 12"x20" overall and with the character image measuring 7.5"x16.5", the transparency cel is in fine condition with a few small dings in the cel from handling. There is also a piece of art tape of unknown origin with an illegible message taped near the center bottom. The full color image shown is a reference screen grab from the film, which is from the scene that this piece was used to develop. This image is just for reference and is not a physical print included with the art.