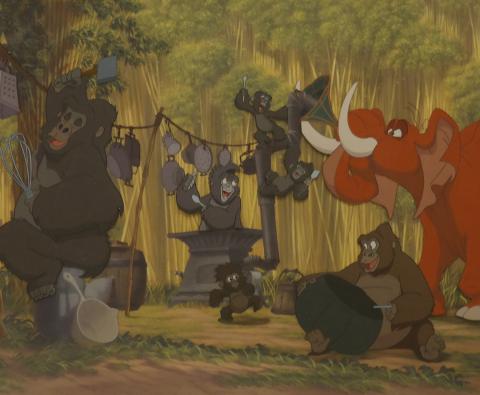 This is an original hand-painted limited edition cel from the Walt Disney Studios feautre film, Tarzan (1999). The image features Terk and the monkey and elephant band that plays the great musical number, Trashin The Camp. This is a very special limited edition as it is a piece that was only made available to the cast and crew that worked on the film. After finishing a film, the studio would pick a few images from the movie and offer to each employee an opportunity to purchase any of the proposed limited editions. They would only create as many limiteds as were ordered, so the numbering on the front of the cel just shows the number of the particular piece, but not the overall edition number, as it wouldn't have been known at the time that the individual limited was created. The overall measurements of the piece are 19.25" x 28.5" framed with the mat opening measuring 12.5" x 22" and the image itself on the cel measures 9" x 19". This piece is in great condition with some minimal scratching to the frame, but the cel is perfect!