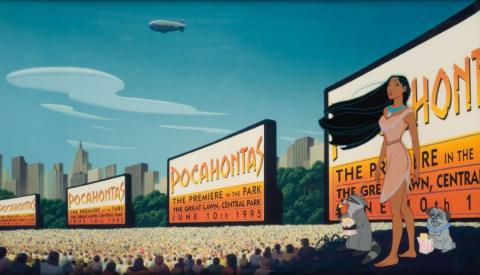 A limited edition cel from the Walt Disney Studios animated film Pocahontas (1995). Featuring Pocahontas, Meeko, Percy, the cel was created at the studio and used to commemorate the public premiere of the film at Central Park in New York City. The special event was held on June 10, 1995 and the limited edition was made to be an exclusive for those attending the event. Measuring 16"x23" framed with the mat opening measuring 9.5"x16.5", and with the character image measuring 6.5"x4", the limited edition is in fine condition, unexamined out of frame, with minor wear to frame with scratches and scuffs.