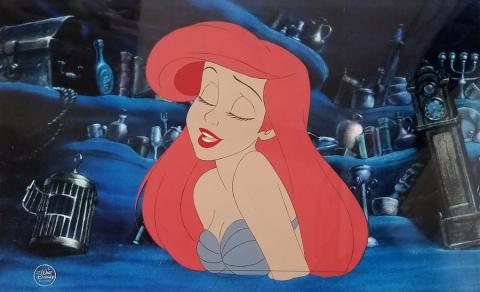 An original production cel from the Walt Disney Studios animated film The Little Mermaid (1989). Featuring Ariel, the production cel was created at the studio and used during the animation process. The piece is an actual frame of animation created for a scene or segment that appears to have been cut from the final release of the film. It's possible that the cel was animated as part of Ariel's movement during an argument with Triton or during the Part of Your World sequence, but was taken out for a camera cut-away to another character. Measuring 16.25"x21.75" framed with the mat opening measuring 9.25"x14.75", and with the image area measuring 8"x7", the cel is in very good condition. The studio prepared the cel by trimming the lower edge of the cel including the peg holes, and pairing it with a color copy reproduction background.