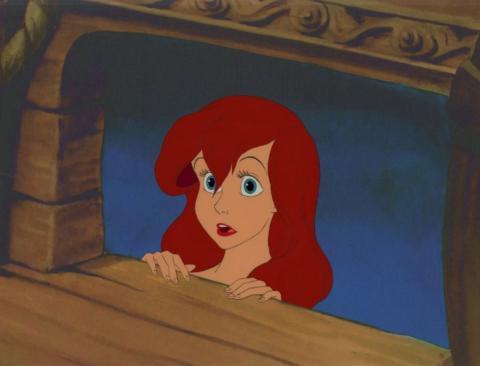 An original production cel from the Walt Disney Studios animated film The Little Mermaid (1989). Featuring an image of the gorgeous Ariel, awestruck after laying eyes on the handsome Prince Eric for the first time, the hand-painted cel was created at the studio and used during the animation process. It is an actual frame of animation that was photographed and appears in the film. Disney Legend Glen Keane designed and animated Ariel, bringing the lovable character to life on screen. The Little Mermaid was the last Walt Disney Animated Feature Film to use hand-painted animation cels, making this a true artifact of animation history. The cel is paired with a color copy reproduction background. Measuring 10.5"x13" overall with the character image measuring 5.75"x5", the piece is in fine condition.