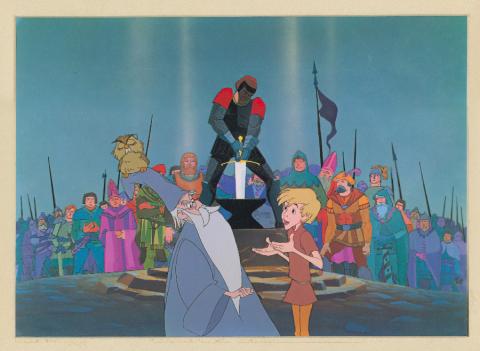 This is a vintage Disney print featuring a wonderful image featuring Merlin, Archimedes, and Wart overlooking an unsuccessful attempt at removing Excalibur from the stone, from the 1963 animated feature, The Sword in the Stone. This print was likely made in the mid 1960s, likely around the time the film was released, as it is a dye transfer print, a technique for printing that was only used for a short period, but produced rich, saturated colors. In the late 1960s and early 1970s, the studio started using modern lithography for the prints they were creating for sale rather than the dye transfer process due to ease of printing. The print is still in its original mat as prepared by the studio with the short title written below the mat opening. The overall matted piece measures 15.25" x 17.5" with the mat opening measuring 8" x 11.5". The print is in very good condition with minor discoloration and wear and scuffs on the mat.