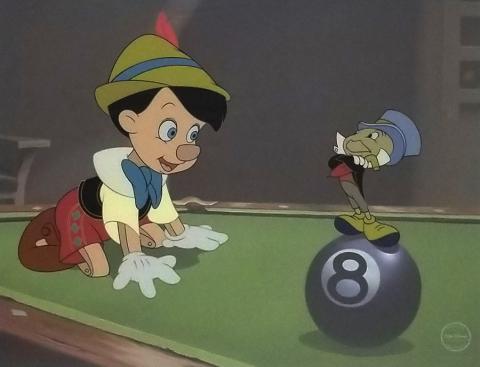 This is a limited edition sericel depicting a scene from the Walt Disney Studios animated feature Pinocchio (1940). Entitled "Behind the Eight Ball,” the sericel features Pinocchio and Jiminy Cricket on a pool table at Pleasure Island. It was produced in 1999 in an edition of 2,500 pieces and is signed by Dickie Jones, the voice of Pinocchio. Measuring 17.5"x20.5" framed with a mat opening of 10"x13", and with the image area measuring 7.75"x10.75", the sericel is in fine condition, although unexamined out of frame, and comes with the original certificate of authenticity.