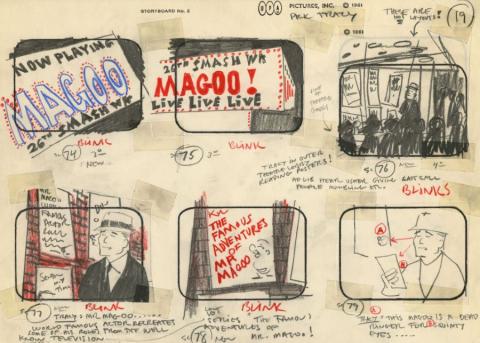 An original storyboard drawing from the UPA animated cartoon Mr. Magoo's Dick Tracy and the Mob (1965). Featuring a sequence of Dick Tracy looking at a marquee advertising a Mr. Magoo live show, the drawing was created for a very special and unique crossover episode that had Mr. Magoo interacting with Dick Tracy characters. The drawing was created at the studio and used during the development of the episode. Measuring 9"x12.5" overall, and with the image area measuring 7"x11.5", the storyboard drawing is in very good condition with light edge wear, minimal smudging throughout, and tape used to affix some panels to the page by the studio.