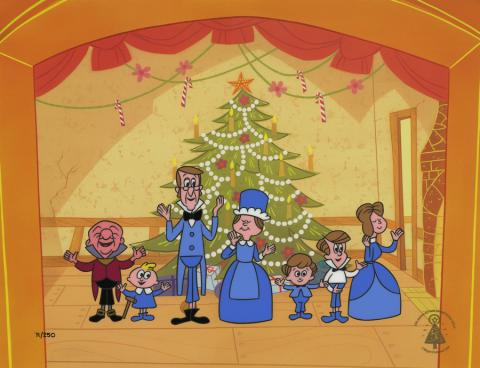 This is a hand-painted limited edition created in 1997, entitled Christmas Carol Finale, and featuring imagery from the classic special, Mr. Magoo's Christmas Carol, in honor of the 35th anniversary of the film. This limited edition was recreated from animator Paul Carlson's drawing taken from the final sequence of the 1962 animated television special. The original hand-inking was accomplished on acetate by Judi Cassell, which was then transferred to the limited edition's exlar film through the fine art silk screening process. Each cel was then hand-painted using the original colors determined by UPA studios. The background was created by Ron Dias and recreated for the limited edition using a fine art lithographic process. Each limited edition cel is individually hand-numbered, features the seal of authenticity of UPA, is accompanied by the original COA from the publisher of the limited edition. This cel was produced in a strict limited edition of only 250 pieces with an additional 25 AP's and 25 HC's. The cel is matted with a measurement of 20" x 23" matted and a mat opening that measures 12.25" x 16", with the hand-painted character image area measuring 5.5" x 11". This piece is in great condition with minor wear to the edges of the mat.