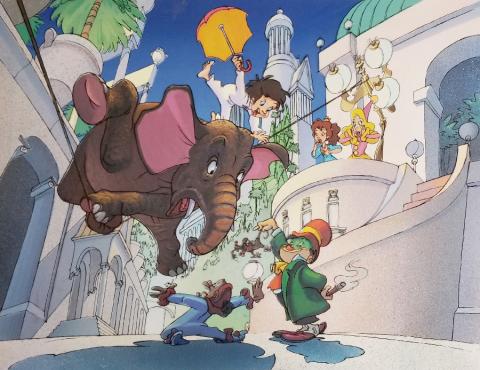 The Little Nemo comic strip is one of the most beloved and revered comic strips. It was published from 1905 to 1927 and features art and stories by the legendary Winsor McCay. The love for this classic story spawned modern reimaginations of the characters' adventures. This is an original concept painting from the Tokyo Movie Shinsha Studios development of a series based on Little Nemo in Slumberland (1989). The 1989 adaptation was a joint venture between United States and Japanese animation companies. The film premiered in Japan in 1989 and although it did not have a great box office outcome, it was rather well received critically. This mixed reception and the anticipation for the American release encouraged the studio to develop a series based on Nemo's adventures, but the series never made it to production as the lackluster ticket sales in both countries discouraged further progress on the film. This development painting features Nemo, Flip, Princess Camille, Bonbon, and a clown like sidekick (who seems to have been planned as a regular character) performing as though they are in a circus with an elephant. This image would have related to a specific storyline used to pitch the series, in an attempt to capture an episode's storyline in one grand singular image. The painting was created at the studio and used during development, so it features spectacular imagery that really captures the feeling of the series. The overall measurements of the piece are 21" x 26.25" and the image itself measures 18" x 23". The concept art is in very good condition with tape residue around edges from prior matting.