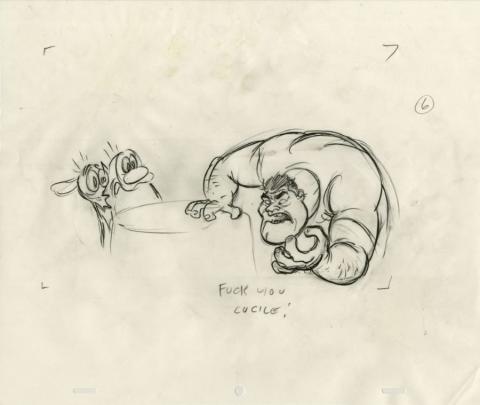 A rough layout drawing from the SPUMCO Studios animated series Ren and Stimpy Adult Party Cartoon (2003-2004). Featuring Ren and Stimpy out to dinner with a very angry Fire Chief, the drawing was created at the studio and used during the animation process for the episode Fire Dogs 2. After airing on Nickelodeon, Canadian animator John Kricfalusi worked with Spike TV to "revamp" The Ren & Stimpy show to be more vulgar and tawdry than the original cartoon, the network aired 3 episodes in 2003 before being removed from the network, with the remaining episodes being released on DVD. Measuring 10.5"x12.5" overall, with the character image measuring 5.5"x10", the drawing is in very good condition with general handling wear, graphite smudging, a stain on the top middle, and a crease on the lower right corner.