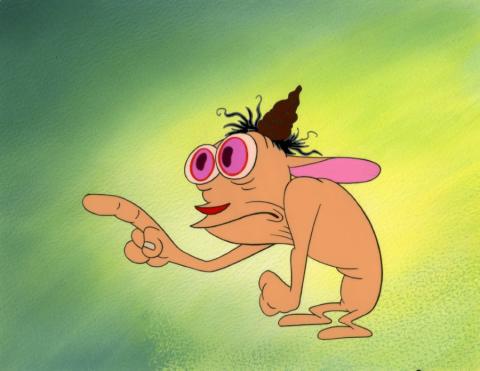 An original production cel and background from the Nickelodeon Studios animated series The Ren and Stimpy Show (1991-1996). Featuring Ren with a pile of coffee grounds on his head, the hand-painted cel was created at the studio and used during the animation process for the episode Stupid Sidekick Union. The cel is paired with a production background that was also used in the animation of the series for the episode Terminal Stimpy. Both layers are actual pieces of animation that were photographed and appear in the show. Measuring 10.75"x13.75" overall with the character image measuring 6.5"x7.5", the setup is in very good condition with minimal line wear and a small crack in the paint in Ren's ear, and a small fold on the upper left corner.