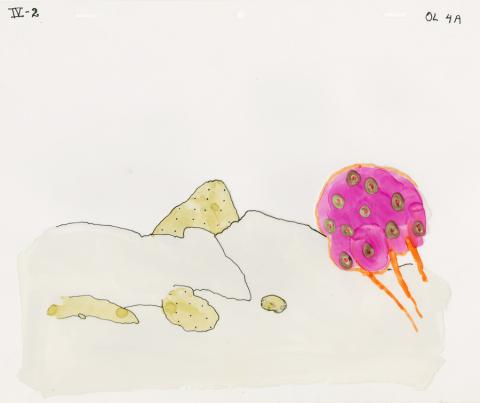 This is an original production background overlay from the Murakami Wolf Studios production The Point (1971). The imagery features plants and rocks that Oblio and Arrow hide behind as they watch the Fat Ladies sing and dance. It was created at the studio and used during production, representing an actual frame of animation that was photographed and appears during this scene in the film. The overall measurements of the piece are 10.5" x 12.5" and the image itself measures 5.5" x 11.5". The production background overlay is in excellent condition. The last image is a screen capture from the scene this background overlay was used for, it is shown for reference and is not a physical print included with the artwork.