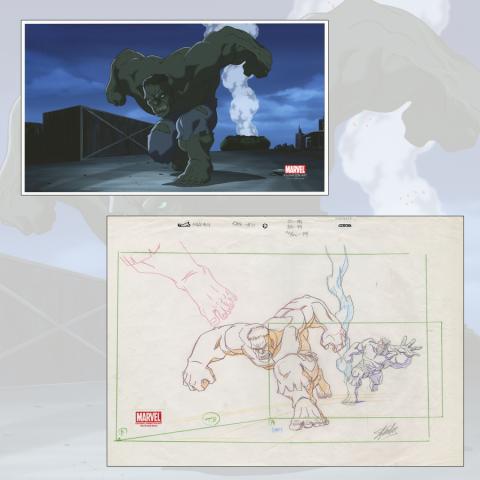 This is an original storyboard drawing from the Marvel Studios production of Ultimate Avengers (2006). This original drawing features a progression image the Incredible Hulk jumping into action, and was created at the studio and used during the production of the film. This film was computer animated, so it can be hard to find production artwork from thie film. This storyboard has also been hand-signed by comic legend, Stan Lee, in the lower right corner and is accompanied by a giclee printed screen grab from the scene in the film that the drawing was used to created. The overall measurements of the drawing are 12.5" x 18" with the image measuring 9" x 14.5" and the print measures 8.75" x 15.25" overall with the image measuring 8.25" x 14.5". The drawing and print are in excellent condition.