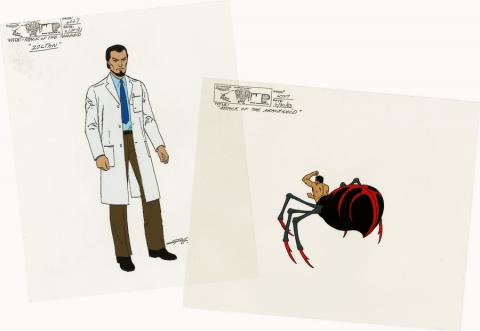 A pair of original model cels from the Marvel Studios animated series The Amazing Spider-Man (1983). Featuring Zoltan and his villain form, Arachnoid, the hand-painted cels were created at the studio and used during the animation process. The pieces were used by the ink and paint department to ensure consistent character design for the episode Attack of the Arachnoid. Each cel measures 10.5"x12.5" overall, with the image of Zoltan measuring 10"x4" and the image of Arachnoid measuring 4.5"x5". The cels are in very good condition with light line wear.