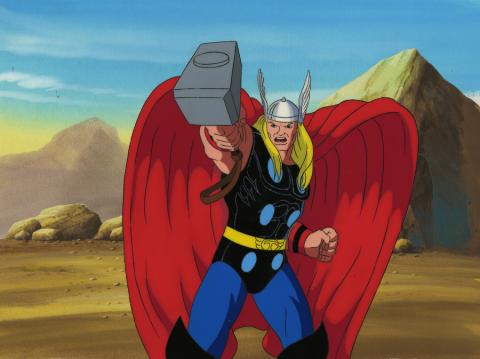 This is an original production cel and background setup from the Marvel Studios production of The Fantastic Four (1994-1996). This setup features a rare image of Thor, who only appeared in a couple episodes, and was created at the studio and used during the production of the series. The cel is paired with a hand-painted production background that is also from the series, and looks fantastic with the image. The overall measurements of the setup are 10.5" x 14" and the main image area measures about 8.5" x 11". The cel and background are in excellent condition with minor wear to the edgees of the background from handling during production and storage.