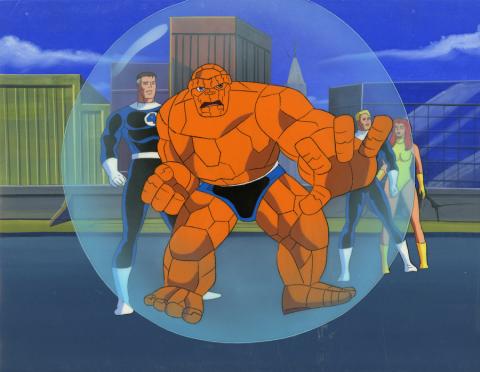 An original production cel from the Marvel Studios animated television series The Fantastic Four (1994-1996). Featuring Mr. Fantastic, Human Torch, and Nova watching in terror as the Thing is trapped in a bubble, the hand-painted cel was created at the studio and used in the episode "When Galactus Calls." It has been paired with a production background from a different episode of the series. Also included are the matching production drawings from the scene. The background measures 10"x14", the cel measures 10.5"x12.5", and the image area measures 9"x9.5". The setup is in very good condition with light line wear throughout.