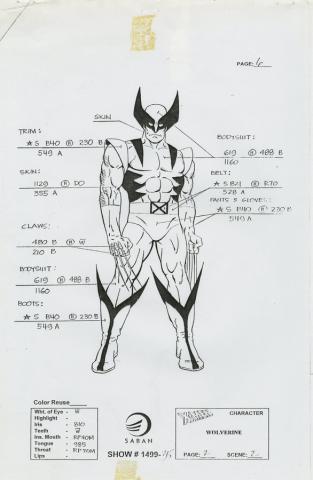 An original xerox model sheet from the Marvel Studios animated television series X-Men (1992-1997). Featuring Wolverine, the model sheet was created at the studio and used by animators to ensure consistent character design. The piece came directly from an X-Men scene folder. Measuring 13"x8.5" overall, and with the image area measuring 8"x6", the xerox model sheet is in very good condition with minimal edge wear, adhesive residue stuck to page, and staple holes along top edge. The model sheet was originally attached to a production folder from the studio as it was stored after studio use.

The artwork was published in the book "X-Men: the Art and Making of the Animated Series" and appears on page 84.