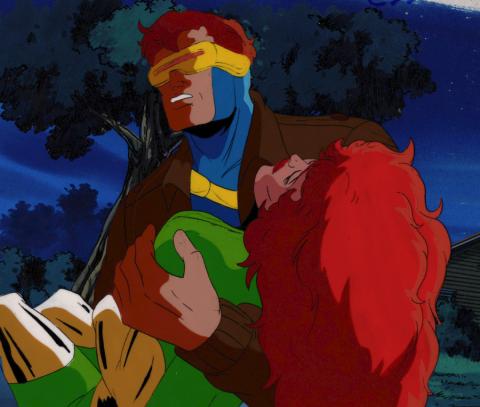 An original production cel and background setup from the Marvel Studios animated series X-Men (1992-1997). Featuring Cyclops and Jean Grey as Phoenix, the cel and background were created at the studio and used during the animation of the episode The Dark Phoenix, Part III: The Dark Phoenix (1994). The cel is from the same episode as the background and both are actual pieces of animation that were photographed and appear in the cartoon. Measuring 9.75"x14" overall, and with the character image measuring 7.75"x8.75", the setup is in very good condition with minor edge wear including small tears and creases in side margins of the background.

The artwork was published in the book "X-Men: the Art and Making of the Animated Series" and appears on page 182.