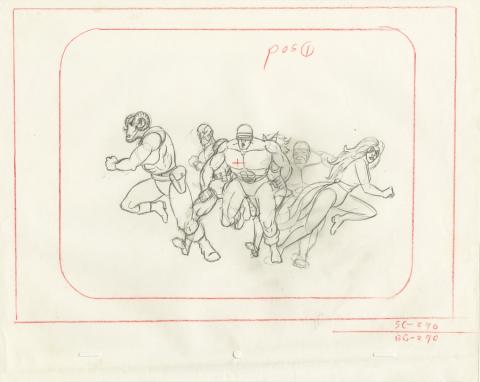 An original production layout drawing from the Marvel Studios animated television series X-Men (1992-1997). Featuring Featuring Quark along with robot versions of Deadpool,Cyclops, Beast, Miss Marvel, and Jean Grey, the drawing was created at the studio for a reanimated scene that didn't end up in the final cut of the episode "Longshot," as documented in the book "X-Men: the Art and Making of the Animated Series." Measuring 10.5"x12.5" overall, and with the image area measuring 4"x8", the production drawing is in very good condition with light edge wear, creases across the bottom edge, and staple holes on the top edge.