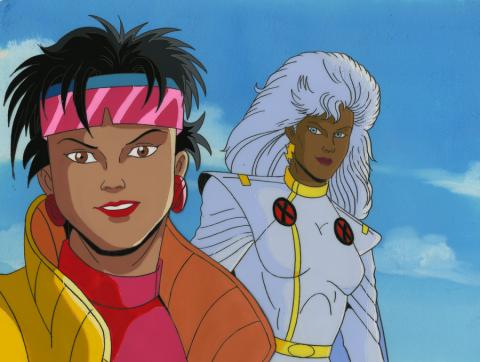 This is an original cel and background set-up from the Marvel Studios production of the X-Men: The Animated Series episode, Phoenix Saga Part 1: Sacrifice. This setup features a key matching image of Jubilee very elated after Storm frees her from being captured, and was created at the studio and used during production. The overall measurements of the piece are 10.5" x 14.5" and the image itself measures 7.5" x 10.5". The piece is in very good condition. The backside of the background has another background image painted on it, but it has been crossed out, apparently rejected during production, but rather than wasting the perfectly good piece of illustration paper, they painted another background on the reverse.

The artwork was published in the book "X-Men: the Art and Making of the Animated Series" and appears on page 2.