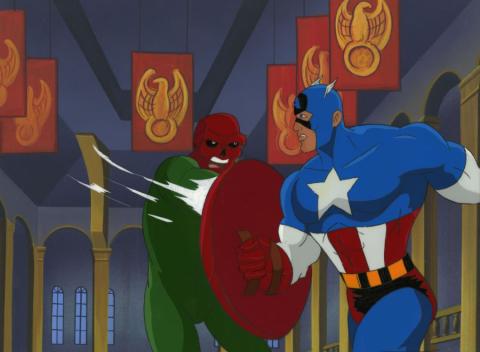 A production art collection from the Marvel Studios animated series X-Men (1992-1997). Featuring Captain America fighting his arch nemesis Red Skull, the hand-painted cel was created at the studio and used during the animation process of the episode Old Soldiers (1997). The piece has been paired with a production background from the same episode and is also accompanied by the matching production drawing, which gives further insight into the animation process. Measuring 10.5"x12.5" overall, with the character image measuring 7"x8.5", the artwork is in fine condition with minimal line wear.