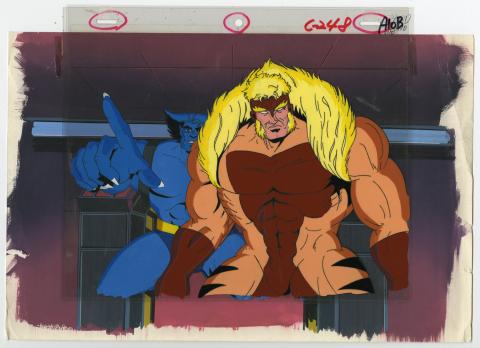 This is an original production cel and background set-up from the Marvel Studios production X-Men (1992-1997). This production cel and background set-up features Beast and Sabretooth and was created at the studio and used during the production of the film. The overall measurements of the piece are 10.25" x 14.25" with the character image measuring 7" x 10.25" and the image itself measures 8.75" x 13". The matching drawing for Sabretooth is included, the matching drawing for Beast is included (althought it is slightly damaged, and an additional mouth layer for Beast is also included. This is a one-of-a-kind key matching production set-up and is in very good condition overall with some edge wear to the background.