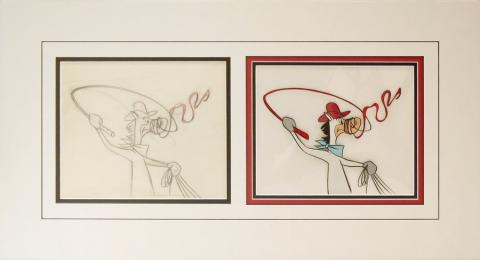 This is an original production cel and production drawing from a commercial for Kellogg's cereal featuring the Hanna Barbera Studios character Quick Draw McGraw (1960s). This piece features Quick Draw McGraw cracking his whip, which in the final commercial spells out "Kellogg's." It was created at the studio and used during production, representing an actual frame of animation that was photographed and appears in the advertisement. The overall measurements of the piece are 16" x 29" with a mat opening of 8" x 9.5" for the cel and 8.5" x 10" for the drawing.The image itself measures 7.5" x 8.5". This piece is in very good condition.