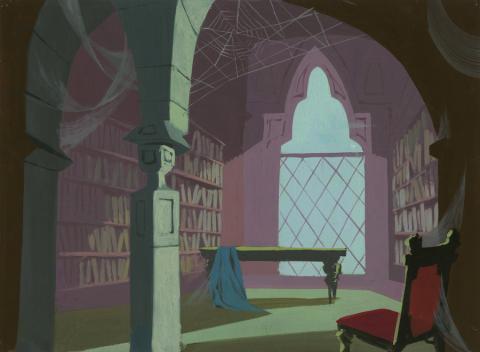 An original background concept from a 1960s or 1970s Hanna Barbera Studios cartoon. Featuring what appears to be a spooky library interior setting similar to what was usually seen in Scooby Doo, the hand-painted concept was created at the studio and used during the development process. The painting was created by renowned artist and animation painter Paul Julian. Julian worked on such Hanna Barbera creations as Jonny Quest, A Man Called Flintstone, Space Ghost, and Valley of the Dinosaurs, but we are not sure which project this piece was used to develop. Measuring 6"x8" overall, the concept art is in very good condition with minor handling and edge wear from studio use.