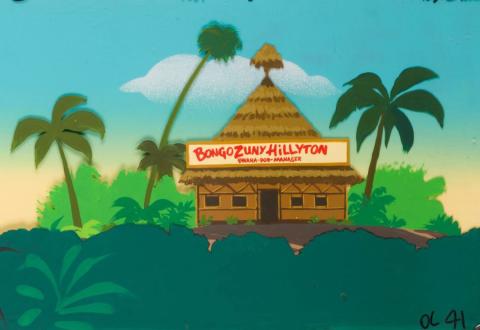 An original production background from the Hanna Barbera Studios animated series The Super Globetrotters (1979). Featuring a multilayered rendering of a lush tropical landscape complete with a thatched building with a sign which reads "Bongo Zuny Hillyton Bwana-Bob-Manager", the hand-painted background was created at the studio and used during the animation process. The piece is an actual frame of animation that was photographed and appears in the episode "Super Globetrotters Vs. Bwana Bob". Measuring 10.5"x63" overall with the image itself measuring 9.5"x63", the background is in very good condition. Due to size, the background ships rolled.